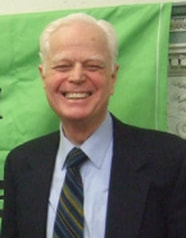 Alan Cary (Credit: Gus Butera)
When Alan Cary moved into his apartment at 884 West End Avenue, he had the foresight to memorize the date. It was October 14, 1962, which qualifies him to become the newest member of our Residents of Long-Standing Hall of Fame. Congratulations Alan!

Originally from Boston, Columbia University drew him to our area. He lived on W. 114th in a tiny room in a building that was so old, the electricity was direct current and Alan had to use an inverter in order to power his phonograph.

Alan is a musician, specializing in performing old popular songs on guitar and banjo. He’s been making his living that way for 49 years, since sing-along banjo parlors became all the rage. More recently, he has enjoyed being a strolling singing banjo player in nursing homes, including both the Jewish Home and Hospital on W. 106th St., and Amsterdam House, near St. Luke’s Hospital. Before becoming a professional musician, he worked in publishing and edited two reference books: The Random House Dictionary of the English Language and the Columbia Encyclopedia.

Along the way, he met and married his wife Mary Lou, whom we hope to induct in only 20 more years. They enjoy traveling together, and have made exploring Italy the focus of their travels, usually staying in an apartment or private home. They were recently lucky enough to win a week’s stay on the Amalfi coast, which they look forward to redeeming in 2015.

Alan is a former member of the Block Association Board of Directors. For 20 years, he made our neighborhood’s foliage his primary concern. He achieved the rank of tree steward through a New York City Parks Department program and saw to tree pruning, feeding and tree well repair.

In answer to my question about the similarities and differences in the neighborhood during his 51½ years on our blocks, Alan quoted his father, “Things are more the same than ever.” The biggest change for the good that he observes is the improvement of W. 103rd St. between Broadway and West End Ave., for which he credits the Marseilles (our hosts tonight) and the Alexandria (250 W. 103rd St.). A change for the worse is the preponderance of commercial vacancies along Broadway. He doesn’t recall the convenience store at Broadway and 103rd St. having been closed before in his time here. He observes that one aspect of the neighborhood has remained the same: the communitarian spirit. In his words, “I am full of admiration for the Block Association. They are grassroots government at its noblest.” Thank you, Alan, for the compliment.