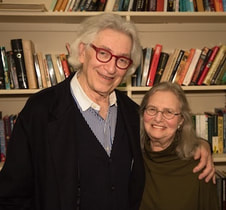 Ted and Asya Berger (Credit: Gus Butera)
In March 2016, we honored our 2016 neighbors of longstanding, Asya & Ted Berger, Lily Friedman, and Joy Kim.  Hedy Campbell's remarks at that ceremony are reproduced below.


Asya and Ted Berger moved here in 1964, soon after they were married.  Like many young couples, they started out in a tiny brownstone walk-up.  Unlike many young couples, when they were ready to trade up to something larger, they only moved one building to the east, remaining on 103rd between West End Avenue and Riverside Drive. Ten years later, when their landlord told them the building would be sold, they were able, with the cooperation of another couple and a lending institution that was willing to overlook that the neighborhood was redlined for mortgages, to become homeowners. In those ten years, they’d not only fallen in love with the neighborhood and set down roots, but they became founders of the Block Association, for which we are all very grateful.  Our very popular Halloween Parade, the Spring Bazaar, provision of guard service, and the quarterly newsletter are all direct results of their efforts.

Asya and Ted are both from Providence, Rhode Island, although Asya arrived there as a hidden child from Lithuania during World War II.  They both came to Manhattan to pursue graduate work: Ted in literature, Asya in music.  Ted spent a few years as director of Financial Aid at Columbia’s Graduate School of Arts and Sciences, before discovering his true calling as an arts administrator.  He was director of the New York Foundation of the Arts for 35 years before retiring in 2006.  In the time since, he’s made a habit of overcommitting himself to various arts organization boards, including the Actors’ Fund, leading him to occasionally daydream about actual retirement.  Asya ultimately tabled a career in music in favor of raising their son, who is now a sculptor and faculty member at NYU, but meanwhile found time to spend 24 years as director of the NYU Humanities Initiative.  After having retired from that position two years ago, she has re-embraced music with a vengeance, and spends many happy hours playing the piano as well as volunteering as a reading tutor at P.S. 166 and as a cook at the B’nai Jeshurun soup kitchen.

What’s changed about the neighborhood in the time since they moved in, and what’s the same? Ted remembered the abundance of movie theaters, and that there used to be a florist, Mr. Abalafia, who sold inexpensive flowers on the corner of W. 103rd and Broadway, much as the greengrocers do, as well as a nice florist, Paris Florist, in pretty much the same location where we now have a high-end florist on the corner of W. 102nd and Broadway.  Asya noted that the diversity of the restaurants has changed tremendously.  Chinese food used to be the only available choice, except for the Broadway coffee shop.  They wonder if the character of the neighborhood has changed.  Sometimes it doesn’t seem as if it is as filled with interesting people as it used to be.  They also shared their concern that with the significant improvement in safety to the neighborhood in the 50 years since they moved in, the spirit of volunteerism has dwindled -- an issue the Block Association contends with constantly. 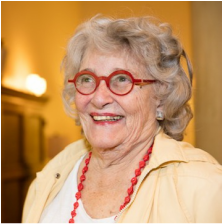 Lily Friedman (Credit: Gus Butera)
Lily Friedman moved into the neighborhood in the mid-1960s. She admits to having hated New York at first, as it was a far cry from both the south Jersey/Philadelphia area where she’d been raised and Ann Arbor, Michigan, where she completed her undergraduate degree in music.  Lily took a break from music in order to raise her two sons, one of whom is working on his Ph.D. in social work and the other is an artist working in computer graphics.  After her children were grown, she found her way back to music and co-founded Summertrios, a chamber music organization for amateurs that runs week-long camps for musicians and was its music director for 25 years. She is now director emerita and continues to host fund-raising events in support of the group in her home.  Among the most popular of those events is an annual Russian Orthodox Christmas party, at which Russian folk music is played on traditional instruments by world-class musicians.

Lily lives with her partner of 30 years Michael Kruge, a retired salesman and WWII Air Force veteran.  She gives him all the credit for having exposed her to all things Russian Orthodox, including the music she’s grown to love so much.  Through her, he discovered his own interest in more classical musical forms.

Lily identified the aesthetic beauty and sense of calm about the neighborhood as unchanged since she moved here.  The biggest difference, she noted, is the cost of apartments, and consequent decrease in artistic people in the neighborhood.  She recalls that there was such an abundance of performers in her building that they were able to launch an annual show, which they presented at the Master Apartments auditorium. The change in the stores on Broadway and, especially on Amsterdam and Columbus is also a big difference. 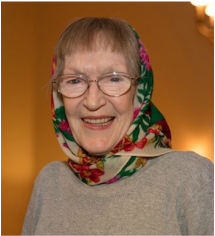 Joy Kim (Credit: Gus Butera)
Joy Kim has the distinction of having moved into her apartment as the result of a mistake.  One day while apartment hunting, she was unsuccessfully looking for another address in the neighborhood.  She stuck her head into the Broadmoor for directions, met the landlord, looked at an apartment that was available there, and has been on 102nd St. ever since.

Joy is a native of Denmark and was a hidden child in World War II.  She left Denmark on a fishing boat that brought her to Sweden, where she lived before moving to the States in 1959.  But she lived on the Upper East Side, requiring one more migration.  She landed a job at the St. Luke’s Hospital blood bank and moved west.  She lived in several apartments in the neighborhood before settling in to the Broadmoor.  She became one of the first three patients at St. Lukes to undergo open heart surgery, raised her son, who is now a chef, in the neighborhood, started working at St. Luke’s Hospital for a second time, but in the accounting department, and survived a brain tumor!

Joy enjoys reading, classical music, and likes to walk every day, usually sticking to the streets rather than the parks.  She describes the streetscape of West End Avenue as having remained unchanged since she moved in so long ago, and thinks of it as the Park Avenue of the West Side. The change in the plantings on the medians is a change for the better, she commented, and a really noticeable difference, she believes, is that 96th Street is no longer a divide between the good neighborhood to the south and the no man’s land to its north.

Editor's note: We regret to report that Joy Kim passed away in May 2016 after a long illness.