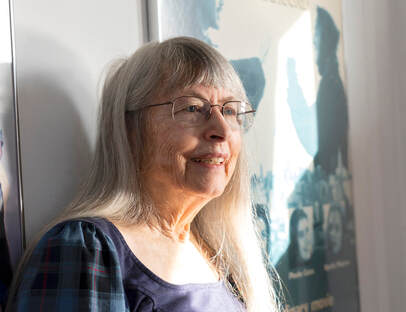 With slight delay due to the pandemic, our 2020 Residents of Longstanding were announced in early 2021. Dolores Schaeffer and Sally Jo Sandelin are our inductees for 2020. Below are excerpts from Hedy Campbell's remarks.

Dolores Schaeffer arrived in New York City in 1964 because she wanted to act and, in fact, accumulated plenty of performance experience. She appeared in Light Fantastic, which she describes as a small cult film, recently rediscovered and screened by the School of Visual Arts. But to say that she’s an actor would sell her short. In her years in New York, she also earned a teaching degree and worked as a teacher at a Montessori school in St. Michael’s church, then earned an MSW and served as a case worker for Bronx Hospitals’ Dept. of Children’s Services while raising her son. Acting was, she discovered, “incompatible with parenting.” She’s also studied street theater in London on her way to earning a master’s in creative dramatics, took classes in painting, and run marathons. She returned to acting in 2002 and, recently began narrating audiobooks. She’s also working on writing a children’s book for her granddaughter, who is also an Upper Westsider.

Along the way, while acting in a project her son was directing as part of his film school admissions portfolio, she met her husband, Bill Weeden, who was also in the cast. They married in the park in 1995, and had their wedding reception at Indian Café, a neighborhood mainstay with a devoted clientele that was in business on Broadway at W.107th St. for decades. They’ve since appeared in a bunch of projects together and recently created a sound studio in their apartment so they can narrate audiobooks together as well. Thanks to Bill, Dolores’s family expanded to include a stepdaughter and then two step-grandsons.

As I do with all of our inductees, I asked Dolores if she could compare living in the neighborhood now with how it was when she moved in. She was able to identify some similarities and some differences. Dolores recalled having to “run home looking over your shoulder,” when she first moved to our blocks, which is no longer the case. She also remembers that drive-by shootings weren’t unusual, so kids weren’t allowed to go out and play in the parks with their friends as they later became able to do. 96th St. was, she described, a much more distinct dividing line, and that there are many more trees on our blocks now than there were then. She’s always been a big fan of the restaurants along Broadway, although they are, she says, much more expensive than they were in the 1960s! Her current favorites, at least before the onset of the pandemic, are the Metro Diner, Flor de Mayo, and the $10 pasta special at Fumo.
Please join me in welcoming Dolores to the Block Association Residents of Long-Standing Hall of Fame.

Sally Jo Sandelin was also drawn to New York City because of the arts. But unlike Dolores, she was drawn as an audience member rather than a performer. A native of Michigan, Sally Jo is a self-described “latchkey child from before they were called that.” She vividly remembers Saturday mornings listening to a radio show called “Let’s Pretend,” in which a different fairy tale was reenacted each week, and “Grand Central Station,” introduced each week with this alluring catchphrase: the crossroads of a million private lives, a gigantic stage on which are played a thousand dramas daily.” She may not have known it at the time, but she was hooked. She went on to become a schoolteacher, and soon figured out that working as a substitute would afford her the flexibility she’d need to come to New York from time to time to see live theatrical performances.

In December of 1970, she came to New York to visit a friend, with a plan to attend as many theater, ballet and opera performances as she could. She got a part-time Christmas job at Gimbel’s in order earn some money to offset the cost of the tickets. She bunked with her friend, and somehow just never went back to Michigan. With the exception of periodic visits to visit family and attend to family matters, she’s been here—in the very same apartment--ever since! Soon after she’d arrived for her “ahem” visit, one of her friend’s roommates got married, leaving a vacancy Sally Jo was ready to fill. Unfortunately, she’s the last man standing, so to speak, among those original roommates, and now has the apartment all to herself.

She remembers the old Met without much fondness, describing it as akin to a high school gymnasium. There was a standing-room-only section and the family circle offered only limited-view seats. She loves going to the opera in the “new” building, and was at one of the last performances there before the pandemic forced its closure: Wagner’s “Flying Dutchman” on March 10th. In the months since, she’s been diverting herself by revisiting past performances via her extensive collection of event programs.

She identifies the architecture of the older buildings as the constant since she moved in 50 years ago. The biggest change? The abundance of shuttered stores on Broadway, especially in the months since the pandemic began, and the lack of variety among the ones that are open. If there were a grassroots movement to bring back the Woolworth’s, she’d be a charter member! As would I! The change in her building lobby is another big difference that she experiences profoundly. When she moved in, there was a congenial group of older women who socialized regularly in the Broadmoor lobby in the evenings and always invited her to join them. The regulars grew old and moved on, the lobby was renovated and reconfigured, and the nightly gathering of old ladies is, alas, no more.